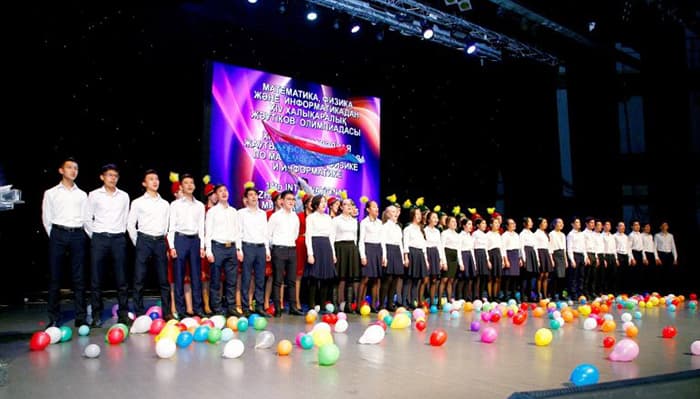 On January 15, 2018, the ceremony of awarding the winners and closing the 14th International Zhautykov Olympiad in Mathematics, Physics and Computer Science sponsored by Lancaster Group Kazakhstan JSC was held.

This unique Olympiad annually held based on the Republican Physics-Mathematics Secondary Boarding School named after Orymbek Akhmetbekovich Zhautykov serves to bring out the individual rating and rating of the strongest teams of the specialist secondary boarding schools of near and far abroad.

According to the results of the Olympiad, seven teams of the best specialist secondary boarding schools of near and far abroad were identified.

In total, following the results of the personal championship, the participants of the Olympiad were awarded 42 gold medals, 63 silver medals and 105 bronze medals.

Out of the total number of 210 medals, the students from Kazakhstan won 60 medals: 7 gold medals, 16 silver medals and 37 bronze medals.

Mr. Berik Kaniyev, Chairman of Lancaster Group and Chairman of the Board of Directors of the Republican Physics-Mathematics Secondary Boarding School Non-Commercial Joint Stock Company, awarded personal prizes on behalf of Nurlan Kapparov Public Foundation to the most distinguished children who showed the best results.

Lancaster Group Kazakhstan nominated a special prize – IPAD in the number of 7 pieces, the Grand Prix to the best team. This prize was won by the team of Physics and Mathematics Lyceum No. 31, Chelyabinsk (Russia). Among the Kazakhstani teams, the first team of the Republican Physics-Mathematics Secondary Boarding School of Almaty showed the best result.

Also, the high level of the Olympiad is evidenced by the fact that the winners and awardees of the Olympiad received educational grants from the Kazakh-British Technical University, International Information Technology University and Suleyman Demirel University.

The International Zhautykov Olympiad was held under the auspices of the Ministry of Education and Science of the Republic of Kazakhstan and the Republican Physics-Mathematics Secondary Boarding School Non-Commercial Joint Stock Company as well as with the support of the International Information Technology University and Akimat of Almaty.